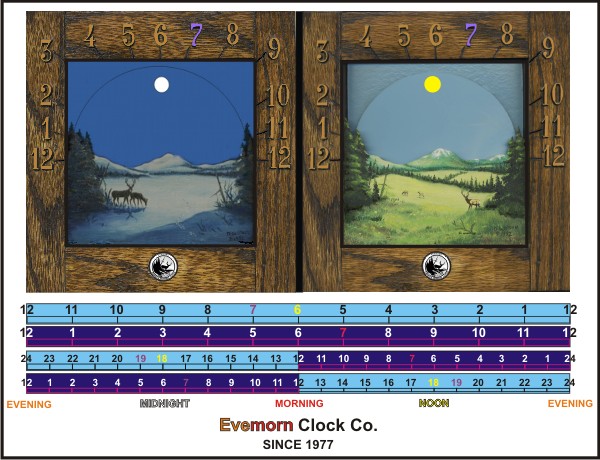 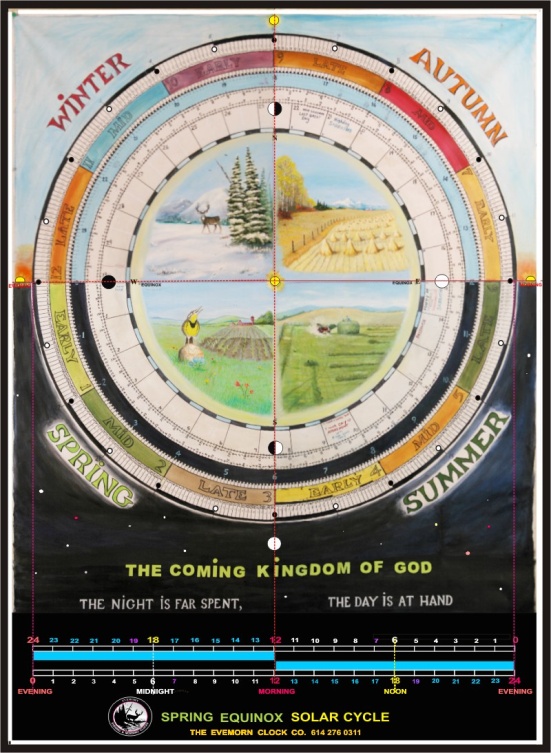 Evemorn is s system of keeping time that is based on the Biblical timescale. Days begin and end at sunset as it was intended in the Bible. The Solar year begins at the Spring Equinox. The week begans with 1st day  and ends The 7th day. This site contains information about the Evemorn system along with articles and artwork by its author Donald Olson. Below is my statement about the Evemorn System.

I believe that the time scale currently used to measure the time of the day to be misaligned. What I mean is that the proper beginning of every day is at sunset, not midnight. I base this conviction on my studies of the Holy Bible.

For the Christian trying to lead a life according to the word of the Bible trying to observe the customs and rituals of the Judeo-Christian heritage--this belief has a direct impact on our actions. Keeping the Sabbath, which is the 4th one of the Ten Commandments, means that we should rest over the entirety of the seventh day of the week.

If the current timescale is wrong, then the millions of people who start their observance at midnight are not respectfully adhering to the wishes of the Creator. For others the significance of the proper timescale is the emotional attractiveness of basing your life on the mechanics of nature.

Read article Daughter of Ancient Babylon, a Roman Dictator Constanine why it's called Mark of the Beast.

Sunrise and sunset are dramatic parts of every day--much more dramatic than the dull-midway point of the night. Who would ever know for sure when midnight occurred if it weren't for the aid of clocks? We need no clocks, though, to inform us that the sun is setting or that dawn has arrived.

I have developed the Evemorn Clock system as an aid to observing the Judeo-Christian Sabbath and Holy Days, and to keep in touch with the cycles of nature. I feel that these are important issues, and I hope that my clocks can help you appreciate them too.

Each of my clocks is handcrafted, painted and custom-made. Encased in stained wood, the clocks come as a set of two--one for day and one for night. The day clock comes adorned with an original oil painting depicting a daytime wilderness scene. The night clock comes with a complimentary nighttime scene. During the day, the background of the daytime clock displays a blue sky with a sun that travels in an arch. It's location in the sky, and its proximity to numbers on the edges, indicate the time. When the sun sets behind the background images, the moon rises on the nighttime clock and works in the same fashion as the daytime clock. Because the sun sets at different locations around the globe according to longitude and latitude, the clocks are made to be adjusted according to your locale. 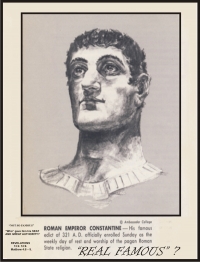 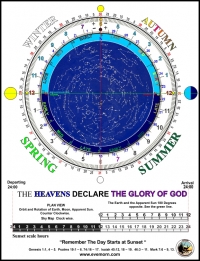 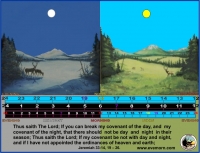 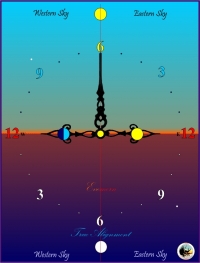 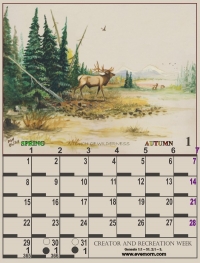 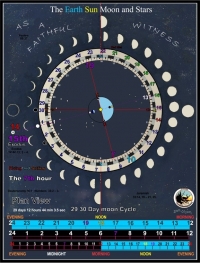 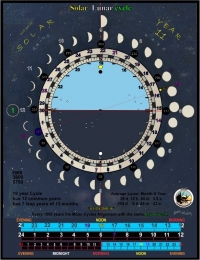